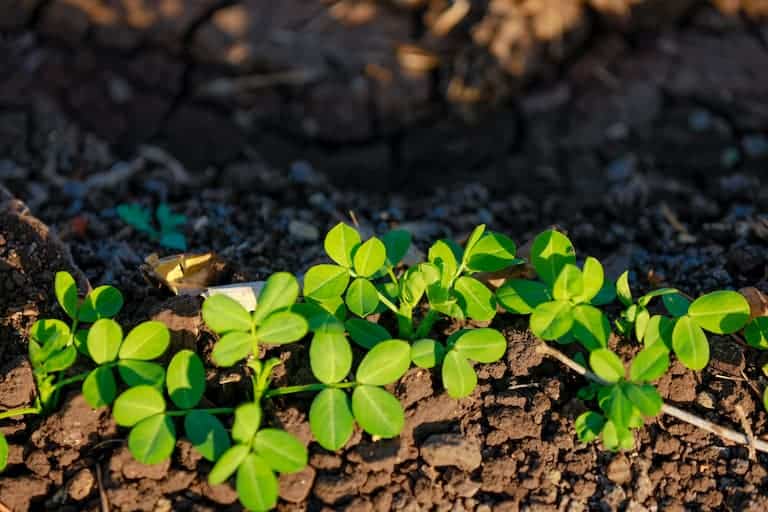 Peanut plants are grown as annual plants, so they only grow during one season. But how exactly does this work, and what’s the lifespan of a peanut plant?

The lifespan of a peanut plant is one year because it’s grown as an annual plant. It can only grow during the warm season and it needs at least 120 frost-free days in the year. Once the year has passed, the plant naturally dies. It can take approximately five months for a peanut to grow to maturity.

Can a Peanut Plant Live Longer Than a Year?

A peanut plant cannot live longer than a year. Once the year is done, its work will be done, and you must plant a new one the following spring. Peanut seeds are generally sown during spring and harvested at the beginning/end of fall.

Peanut plants are grown as annual plants, meaning they’re only active for one season, which makes it impossible for them to live longer than a year. In the United States, peanuts are generally planted in April, and they grow throughout the summer.

The Process Of Growing Peanut Plants

Now, let’s look at the steps of growing a peanut plant. It’s important to remember that the process should only be done during the warm season or your plant won’t grow. Growing peanuts is relatively simple once your soil is at the right temperature.

Generally, the soil reaches this temperature between April and May each year.

If the soil is too cold or hot, your plant won’t grow, so you probably don’t want to try to plant your peanut seeds at a temperature below 60℉ (16℃).

Peanut plants require sandy and well-drained soil, so your soil must meet these requirements. Avoid hard, clay-like soil at all costs, and make sure the spot you choose to plant your peanuts receives the most sunlight. Peanut plants thrive in direct sunlight.

Once your soil is at the correct temperature and in appropriate condition, you can plant the peanut seeds. It’s best to sow the seeds 1”-2” (2.54 to 5.08 cm) deep. Once you’ve planted them, you can leave them be for now.

Peanuts need approximately 1” (2.54 cm) of water every week. Keep any rainfall in mind, as overwatering can slow the growth process. Alternatively, you can choose to water the soil anytime it looks and feels dry. In places with arid weather, the soil may need water more than once a week.

As you continue watering your peanut plant every week, the only other thing to do is let it grow. You’ll notice plenty of growth by around the 10th day, and it’ll continue to grow for the next few months.

Once the plant has yellowed, the peanuts are ready for harvesting.

Peanuts are generally harvested between September and October in the United States. The exact time to harvest the seeds will depend on when you planted them and the type of seed you used.

After they’re harvested, the peanut plant is no longer useful. Its life will end, and you’ll need to plant a new plant the following spring.

Once the plant is fully grown, it should reach around 18” (45.72 cm) tall. During the summer, it’ll have a primarily green color. But as it matures and gets closer to harvesting time, the plant will begin to yellow.

Here are some tips for harvesting peanuts:

Why Do Peanut Plants Only Last a Year?

Peanut plants only last a year because spring and summer are the favorable growing seasons for peanuts. Once the peanuts are ready to harvest, you must dig up the plant and dry it out. At that point, the plant is no longer useful and can’t be reused.

However, there is another type of peanut plant called the perennial peanut plant, which lasts up to 30 years. But it doesn’t produce any seeds, meaning it doesn’t make peanuts. It only grows above the soil as a flower, so you can’t use it if you want to grow peanuts.

It’s primarily grown as a groundcover.

Even though perennial peanut plants don’t produce peanuts, the leaves are edible and can be incorporated into many cooked meals.

The lifespan of a peanut plant is no more than one year, as peanuts can only be grown during the warm seasons. Once the peanuts are ready for harvest, the plants are removed from the soil and dried out, so you can’t replant them.

You must plant new peanut seeds each spring rather than using the same plant.

However, there’s also a perennial peanut plant, which can last up to 30 years. Although it’s called a peanut plant, it doesn’t produce peanuts. The reproduction system in peanuts is very distinct as they do not reproduce as most nuts or legumes. Moreover, they flower above the ground and fruit under the soil. This distinctive feature of peanuts leads to confusion regarding their reproduction.  Peanuts reproduce through self-pollination. That means the plant doesn’t need outside aids like bees or… Not many people realize it, but peanut plants flower, and a peanut grown in the wild will have bright, buttery yellow flowers. However, most peanuts are grown in temperate climates, so they aren’t available in northern climates. But if you live in these climates, can you grow peanut plants indoors? Here’s how to grow peanuts… Peanuts are one of the most used foods across all different cuisines. Surprisingly, they are actually fairly easy to grow. The most common question that amatuer peanut growers have is, how often you should water your peanut plants? You should water peanuts as often 2-4 times a week, providing about an inch (2.5 cm) of…